It’s been a good one. At the start of the year I published a first blog and did intend to do them a bit more frequently. Oh well, as ever I was up to other things, which kind of got in the way. Here are a few of these other things, some adventures in the North of England and the Scottish Highlands.

The Old County Tops
This fell race is a classic, held in each year in the middle of May. 36 miles around the Lake District, taking in three of its highest summits, each of which form the highest points of the old counties of Westmorland, Cumberland and Lancashire. A wonderful run from Great Langdale, through Grasmere, up Helvellyn, off and into the central fells to skirt Raise and ascend Scafell Pike via Angle Tarn and Esk Hause. A rough descent of Scafell Pike leads to a crossing of Upper Eskdale ‐ my very favourite place in the Lake District ‐ and a boggy descent down Mosedale to Cockley Beck. Then up the side of Grey Friar and Swirl How to the Old Man of Coniston. The route ends with a descent to the Three Shires Stone and then back to Great Langdale via Blea Tarn. A grand day out.

This was the third time I have done this race, the second time running with Andrea Priestley. She kindly put up with my steady pace and coaxed me along when I had a really low patch, early in the race on the long steady climb up towards Raise. It is a brilliant low‐key fell race, one I wanted to do for both the classic nature of its route, the banter you get at races like these, and as it would give me a kick up the backside to get fitter for the rest of the summer.

Hebden Bridge to Garsdale
The consistently hot weather started at the beginning of May and pretty much stayed until late July. The off‐road trails dried out and stayed dusty ‐ I took to riding my mountain bike out and about as much as I could.

At the end of June I rode a longish section of the Pennine Bridleway with my friend MJ. An early start from Otley saw us cycling to Bradford to get the train to Hebden Bridge. From here we followed the route north, taking in trails known and unknown to me, crossing wonderful ground, climbing and descending loads on tracks and trails in perfect condition. 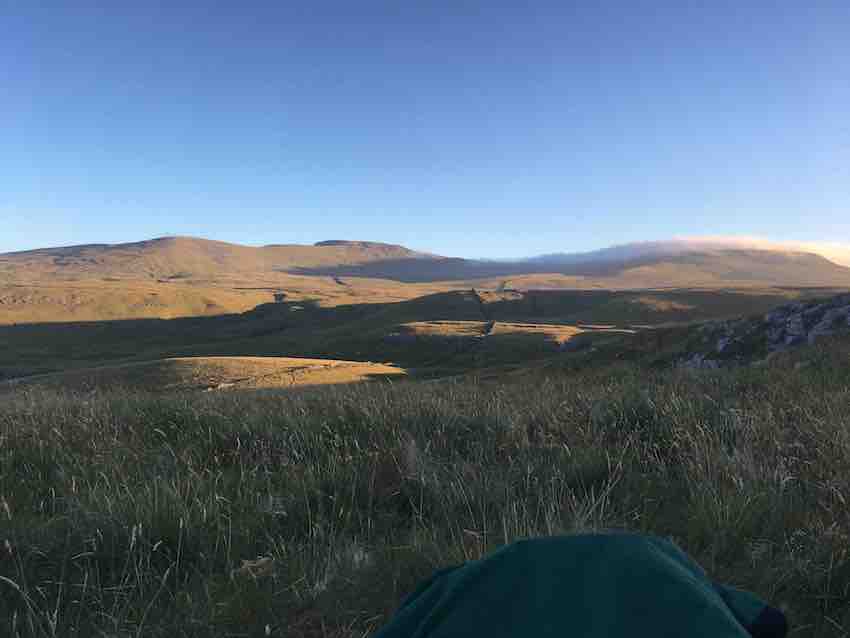 Sunrise from my bivvy bag

A long day’s riding culminated with a bivvy up on Ingleborough Common. The following morning an early start helped us get to Garsdale for a mid‐morning train that got us home for lunchtime. Plenty of cafe stops saw us through and we had dinner in the pub at Helwith Bridge. It was a perfect ride that took in everything that is great about off‐road adventuring by bike :o)

Come July I was again seeking my climbing legs for a quick trip up to Lochaber. Over the last five years or so, Andrea has kept suggesting we go and have a go at the Tranter’s Round. My youngest daughter is now two and my elder six. While it is still of course tricky to find the time to get away to do things like this it is becoming a bit more feasible. With support from my partner Aidan, I found a few days in July.

Tranter’s Round is the original long distance fell-running round in the Lochaber hills. Taking in the full Glen Nevis Horseshoe, it is perhaps the classic line. When Charlie Ramsay extended the route and set his 24-hour challenge, Tranter’s original of course remained. Andrea and I wanted to go and have a go at Tranter’s because it looks a wonderful day out, as well as to have a bit of a look at a large part of the longer Ramsay’s Round. 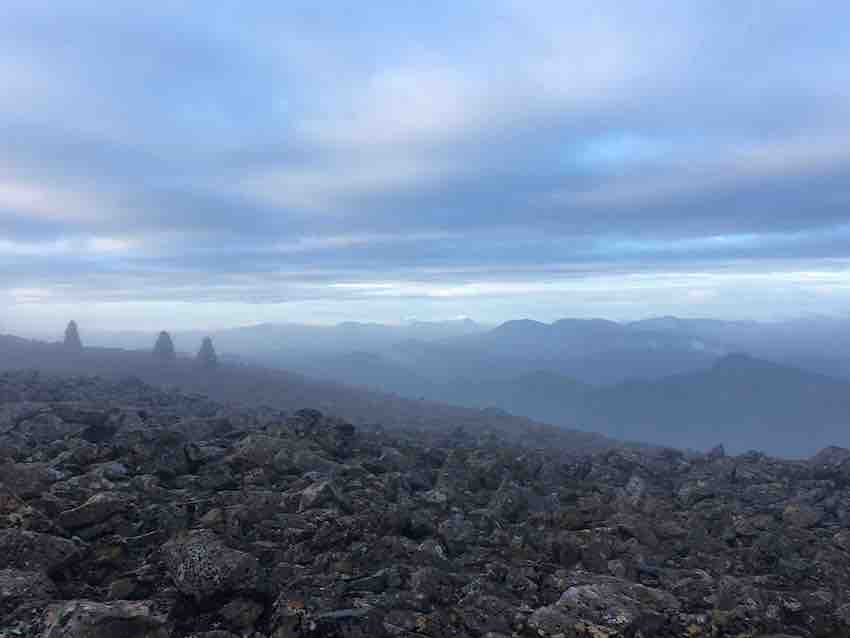 Sunrise from the top of the Ben 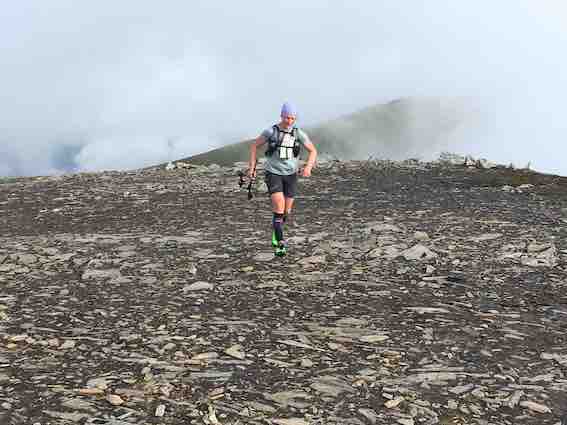 Approaching the summit of Annoch Beag

We were very lucky with the weather. In the days before we started it had rained a fair bit, and before then saw full‐on heat wave conditions. Ours was a cooler day and clear, with superb visibility. We followed the route clockwise starting with Ben Nevis. I had approached the day with some trepidation, while the Tranter’s is similar in distance to the Old County Tops, it has loads more ascent and is rougher underfoot.

It all started to go a bit pear shaped after a few Mamores. My wheels fell off in quite some style (I should stress that, as ever, Andrea’s wheels remained firmly intact). We didn’t finish the route, holding the spine of the route but skirting around and dropping a few of the Mamores. While disappointing neither of us were honestly really that bothered. We had come for a long run and adventure in the mountains and we got it, with amazing views to boot. I will be back for another go and will keep recceeing the Ramsay but if I am honest I think need to do a bit of headwork to make myself a bit more bothered if I am ever to get my mind in a place where it is ready to tackle Ramsay’s Round! That’s not to say I won’t get there however as I do want to do it. Psychology is a funny thing. 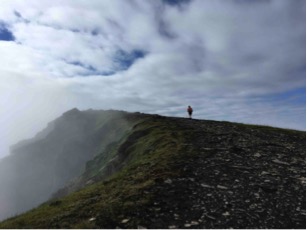 Andrea in the mist

Travelling into the mountains to climb a couple of remote Munros
All too predictably, the weather broke just after the schools broke up for the summer. We headed north to the Highlands for a fortnight, spending a week in Kintail and one on Mull. We had grandparents with us in Kintail, who were more than happy to babysit for a day or so over the week, meaning Aidan and I could get in a couple of those very rare things these days ‐ time out on the hill together.

Aidan is a pretty avid (rabid?) Munro bagger. He now has about 50 to go and is getting them in when he can. A few weeks before we headed to Kintail he had collected a few over in the Cairngorms. Around Kintail and Glen Affric he has a few of the more remote ones to do. This means big days out to some beautiful places, which, funnily enough, I am more than happy to accompany him on. The two mountains we headed for were An Socach and An Riabhachan, two of chain of hills to the north of Loch Mullardoch. There are a number of different ways to approach these, given we were staying to the west of these hills in Kintail, we cycled up to Iron Lodge from Killilan, at the eastern end of Loch Long. 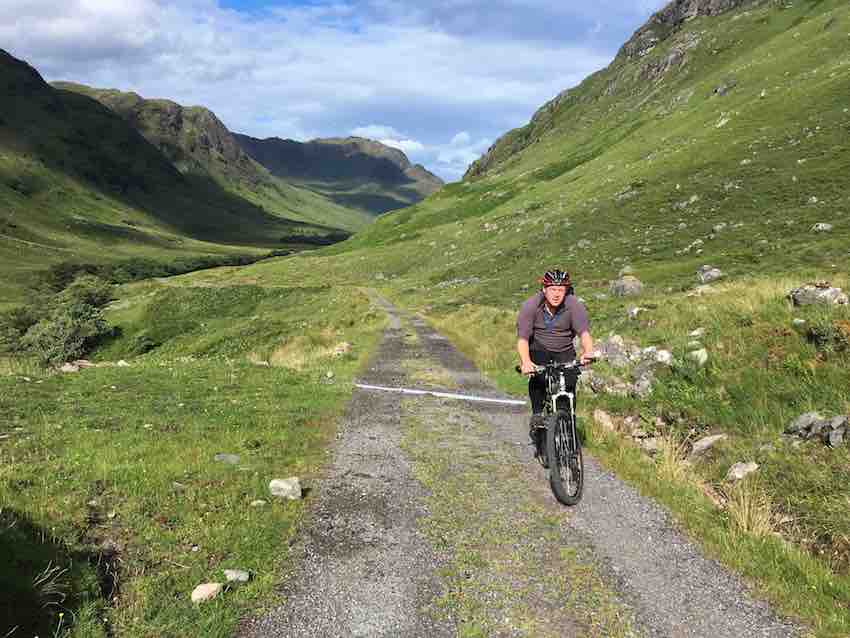 Looking to the Glen Carron hills as we approached An Socach

It was the first time Aidan had ridden a bike for years and, while he did moan a bit, I think he secretly enjoyed it. We left the bikes propped up against a tree and continued our day on foot, a circular route that saw us climbing the hills, descending to Loch Mullardoch and following a rough track back to Iron Lodge.

The day’s weather was mixed. On the tops of the hills we saw a little rain and it was very windy. I am not complaining (these were good summer conditions for Scotland) as it made for the kind of light on the hills that enhances their wonder. On our way around we found a deer antler, I strapped it onto my pack to take back and show our daughters. 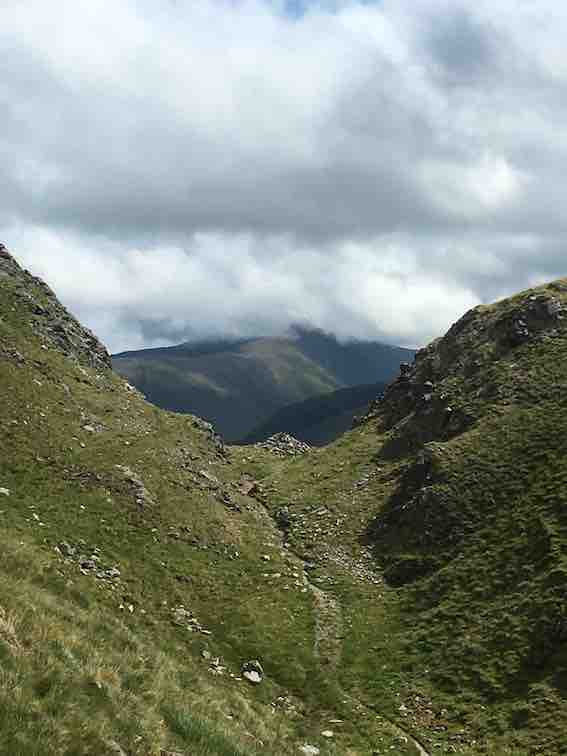 During the week I also took a run around A Ghlas Bheinn and Beinn Fhada, two mountains to the north of the Five Sisters of Kintail. What a day! Aidan didn’t come as he has already done these hills, for me emphasizing the silliness of Munro&#8208bagging. Of course you don’t have to do it that way. For quite a few reasons I have always been wary of actually counting the Munros I climb. However I think I have probably now climbed around 200, some a few times, others the once. Perhaps it’s time to pull a chart out and reminisce? 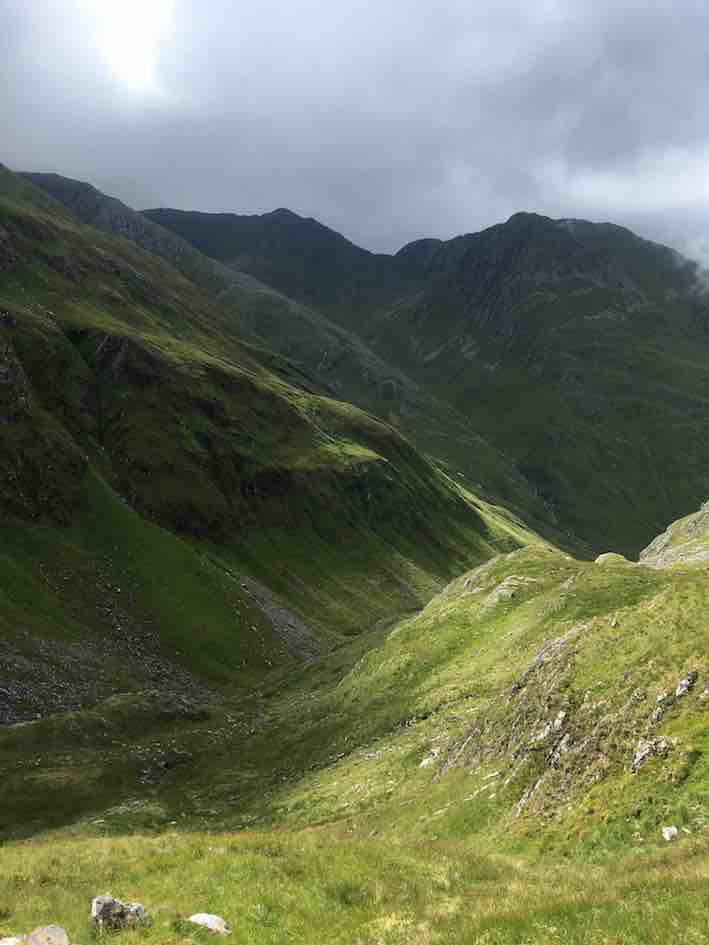 Into Autumn
Less than two weeks after we came back from our holidays we moved house. Just around the corner from where we were living but a big task nonetheless. Settling in is going well and it is good to get something that takes up loads of time out of the way as it means I can fit in a bit more biking and running, painting and writing. These adventures and others have left me inspired, I can feel a painting or two coming on and have been writing and illustrating a new book in earnest over the last six months or so.