A Fleeting Encounter with the Big Grey Man?

I spent the week before Christmas in Boat of Garten near Aviemore on the edge of the Cairngorms with my family. It’s been a few years since I’ve stayed near these mountains, I was looking forward to getting up into them again. We lucked out with the weather, arriving to a few inches of snow on the valley floor to the great excitement of our five and nearly two year old daughters. The snow slowly melted through a week of calm and warmer weather.

Amongst other things, my partner Aidan and I planned each to have a day in the hills while the other entertained the children. Aidan had set his sights on some mountains to the west of Creag Meagaidh (he is a Munro-bagger who currently will only climb Munros he has not yet done) and I wanted to get up onto the Cairngorm plateau. I have climbed these hills before but I am not counting Munros and also strongly believe that however many times I visit the plateau in my lifetime will not be as much as I would like. It had been too long ‐ over six years ‐ since I had last been.

During that time I have read a number of books about these mountains and of the writer’s adventures in them. Among them Mike Cawthorne’s Wild Voices, Christopher Nicholson’s Among the Summer Snows, and I had re-read Nan Shepherd’s wonderful The Living Mountain a number of times. In some ways books like these staved my hunger to be out in these mountains, in others they made be want to be in them even more. The Cairngorm plateau is a unique mountain environment. A landscape consistently above 1000 metres, apart from Ben Nevis home to the highest mountains in the UK. For some the plateau is a spiritual place that holds a fascination that goes beyond the physical challenge of reaching its summits or climbing its cliffs.

The snow and ice were in perfect condition. A low avalanche risk and like running on polystyrene. I wore my studded fell shoes and had a pair of lightweight crampons that I could run in packed in my sack, an ice&#8208axe strapped to the outside. The view from the top of Cairngorm was ethereal. Looking south from the summit showed snowy mountains, cloud inversions and a stunning mid‐winter sunrise, full of depth and colour. It was a clear day. From Cairngorm I could see the gleaming white dome of Ben Macdui and the line I would take to reach it. I planned to head to the bealach by Lochan Buidhe and climb to the summit from there. I traversed the snow in a kind of daze. I was always aware of where I was and what I was doing but the beauty of the day was something else and quite something to take in. I dream of days like these and there I was living one, high on the Cairngorm plateau.

The land west of Lochan Buidhe and the western side of Ben Macdui drops sharply down, over 200 metres into the Lairig Ghru, the legendary gap in the plateau that separates mountains and forms an old way between Deeside and Speyside. The mountains to the west ‐ Cairn Toul, The Devil’s Point, Braeriach ‐ are on the plateau but separated by the gash in the mountains. Initially looking across to them it felt like there could be nothing like the Lairig Ghru between us, that they were close enough I could run to them and be on their summits in little more than an hour. 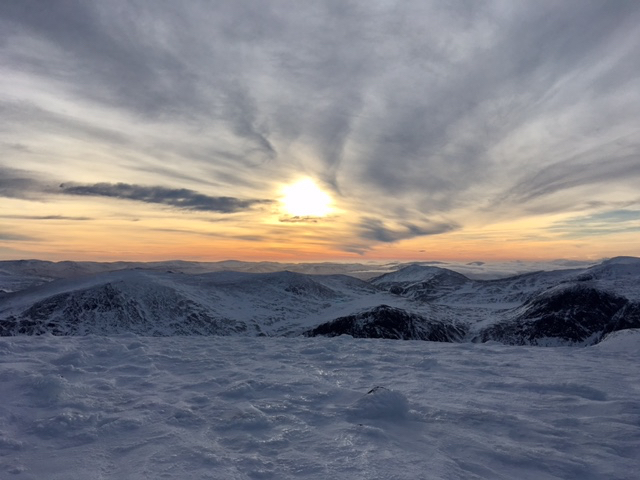 Looking south from the summit of Cairngorm

I contoured into the bealach, joining a path trampled into the snow by the people who had passed this way before me. The route I was then on is probably the most popular way up and down Ben Macdui, at least from Speyside. I felt comfort in the footprints, while I was confident in my own navigation abilities and happy to be out by myself, in these conditions having a handrail of this trodden snowline was reassuring.

From the bealach the ground steepens for couple of miles before tapering off towards the summit. It was slow going, the snow gave a little with each step. I noticed that layers of cloud were coming in from the west, from time to time settling on the tops of Braeriach and Cairn Toul. I felt a tinge of nervousness. I had not been on the Cairngorm plateau in a complete whiteout before but have read and heard friends’ experiences of it. A strange world of complete white ‐ no ability to discern between the snow on the ground and the cloud or falling snow around you. Not only strange but dangerous if you lose touch with your map and place on the hill. I upped my pace, if the cloud were to come in, I wanted to at least to the summit and back to the bealach next to the lochan beforehand. 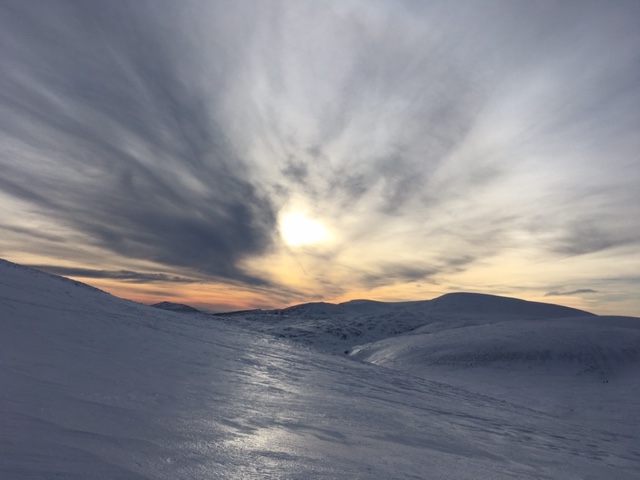 My traverse line across the plateau towards Ben Macdui

From my approach from the north I could see the summit for the last kilometre of climbing. It looked benign, no malevolence about it, this gentle white peak set back in the centre, the highest point about which the other peaks of the Cairngorms bubbled up from the plateau. As the cloud came in my nervousness increased. Less than five hundred metres from the summit the first long stretch of cloud came and went. I experienced a fleeting whiteout and really did not want the clag to come in and stay put. I started to get more nervous. About 300 metres from the summit I had a very strong compulsion to turn around and run away as fast as I could, back to the belach and then the contour line below Cairn Lochan to return to Corrie Cas via the Northern Corries. I turned around, started to run and then caught myself. What was I doing? I was literally at the summit, why run off before actually reaching it? And why was I so worried ‐ I am used to navigating in little or no visibility, following a bearing and using pacing to measure the distance I cover.

I carried on to the summit. I didn’t hang around, the swirls of mist were getting longer and more frequent; I wanted to get off the top with as much visibility as I could.

As I descended at times the clag did come in and settle. The whiteouts were quite something ‐ I really could not discern between snow and cloud. I held my bearing line and counted paces ( although this was not entirely necessary as from time to time the mist would clear and I could rebase).

I reached the bealach with little bother and continued on my route off the hill, soon enough reaching Coire an Lochan and following the easy line down its western side. As I descended a grey cloud layer formed on the plateau, it became windier and started snowing. I had got the weather window. Even then, thinking back to my strong feelings to run away as I approached the summit of Ben Macdui ‐ it really was something approaching terror, certainly extreme uneasiness ‐ I felt embarrassed, foolish, kind of glad I was by myself so I didn’t have to share it with anyone. Pretty soon I was eating chips in the soulless cafe at the ski station, waiting for the bus that would take me back to Aviemore to meet my family.

In the days after Christmas I read one of the books Aidan had given me ‐ The Cairngorms ‐ A Secret History, by Patrick Barker. I really enjoyed it, Barker clearly loves these mountains and the journeys and stories he shares and retells are well written and engrossing. One of the chapters is entitled The Big Grey Man, and details a legendary being or spiritual presence that over the years hill-goers have encountered at and around the summit of Ben Macdui.

Barker writes about the history of different peoples experiences of this thing, this Man. How some experienced the feelings of being tracked physical being, a Yeti-type thing, while in the vicinity of Ben Macdui, often during periods of bad weather. More often however are the stories of a less tangible presence

’More frequently, though, reports of the phenomenon involve a metaphysical dimension. An indefinable sensation of terror or dread is encountered near the summit.’

On reading this passage I felt a kind of jolt. I knew the sensation that Barker was describing, I had recently experienced it during my approach to the summit of the mountain.

Whilst I had heard and read of the Big Grey Man that is reputed to haunt Ben Macdui before, it was not in any detail. Since reading that chapter I have read more tales about him. Stories of epic days and nights out, fighting against awful conditions and an underlying fear of being followed, chased even, by some menacing presence off the mountain. Mine was a very mild experience compared to some, I was out in daylight and good weather but for the lowering cloud base. 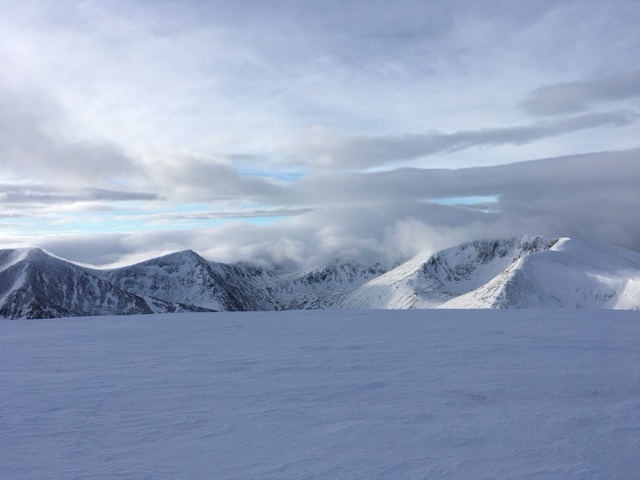 Cairn Toul on the other side of the Lairig Ghru

When it comes to beliefs, whether mystic, religion or anything else, I don’t believe in Yetis. I am not really a believer in anything other than logic and science. I do think that mountains have what we humans can describe as a spiritual dimension, but that this is because wild open spaces can serve to remind us of our place in the world and the cycle of things. 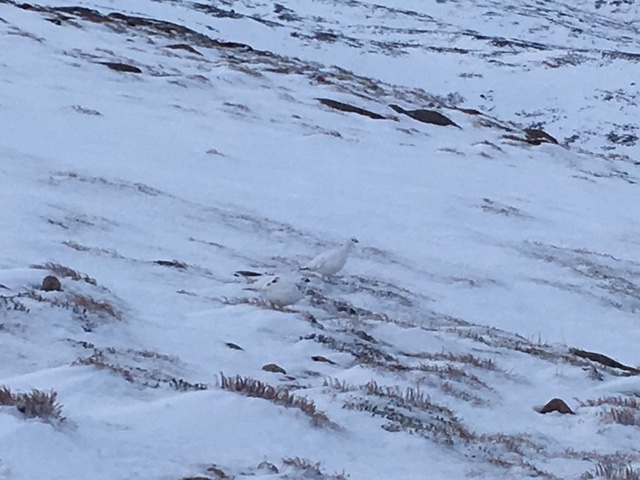 Ptarmigan near the Ptarmigan Restaurant on the way up Cairngorm

Maybe the legend of the Big Grey Man has its roots in the fears we have of getting caught out on Ben Macdui. Despite its benign look that day before Christmas, it is notorious for bad weather and storms that arrive seemingly out of nowhere. My fears and uneasiness that day came from not wanting to get surrounded by whiteness and having to navigate with difficulty back over the plateau and down the mountain, the steep drop off the west side of Ben Macdui into the Lairig Ghru just one of the palpable risks of the place.

Whatever the roots, it was kind of exciting to find out that what I had experienced during my day climbing Ben Macdui had been felt by others too. It has further enhanced my sense of wonder at the Cairngorm plateau ‐ its nature and its mountains ‐ and in the ways the mind plays with our perceptions of risk when out on the hill.